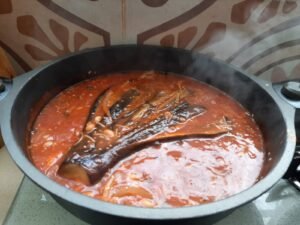 This dish is very not traditionally African, but it is seen around the diaspora from time to time as an offering to Oya. It’s suspected from the tomatoes and beans that the sauce part of this may have originally been something given to a local Mesoamerican or South American storm deity. We don’t know. It does fit the requirements though in that it looks swirly, has eggplant, is brightly colored and tasty, and doesn’t have any palm oil.

Boiled eggs are a good side to this as are any kind of greens.